Traditionally, they are held during winter time, in the New Year’s period, but also in spring and they are characteristic of several regions in the country. Each carnival has its own feature, colorfulness, and different symbolism. The cheerful and masked faces in Bitola region are called “babari”, in Ohrid region-“vasilicari”, in Skopje and Kavadarci regions-“dzamalari”. For those who would like to dive into the roots of the Macedonian tradition, a real rarity is to attend the “Vevcani Carnival”. 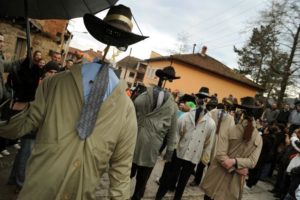 It has been held in continuity for 1.400 years, from the establishment of the village itself, and since 1993 the “Vevcani carnival” is a member of the World Carnival Federation. For the 48 hours, during the carnival customs, the whole area around Vevcani transforms into a huge theater, where on an open stage you can see the most creative and most mystical masks. You wonder how the carnival began? The legend says that a boy, who was the most beautiful boy in Vevacani, before going abroad to work, has been engaged with the most beautiful girl in the village. However, while working abroad, the boy fell from a tall building and suffered severe scars on his face. In winter, when his friends returned to Vevcani, he asked them to hide their faces with masks, so that his fiancé could easier get used to his scarred face. This was the origin of the carnival in Vevcani, village located at the foot of the mountain Jablanica.

The rich architecture, the colorful nature and the abundant waters of the Vevcani Springs, but also the untamed spirit of its inhabitants who proclaimed their village a “Republic”, introducing Vevcani currency and passport for entry in the village, lure a huge number of visitors that come to feel the spirit of this place. The roots of the “Stumica Carnival ” originate in Pagan times, giving a special mark to this region. The game lasts for days, and Strumica is filled with thousands of curious visitors from the country and abroad. If you would like to feel the magic of the carnival, join the procession, mask yourself and try to be part of the tradition. 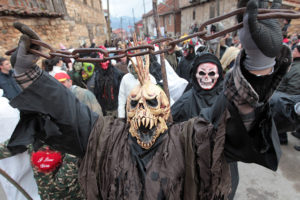 Maybe this year you would be the one to win, because of your imagination and creativity, in the selection of the best mask. During the days of the carnival the city offers a unique opportunity to enjoy and try the famous papers and tasty “ajvar” from Strumica, and as an aperitif try “stumica liqueur”. If you like home made pies and baked beans, then you must visit the village “Lesok” in Tetovo, at the foot of Shara Mountain. Here, at 550 meters above the sea level, you may start with sausages and tasty wine, but also with baked beans from Leshok, “komat” and “turi-potpeci” specialty. You can enjoy the local food while sitting in the beautiful nature and the wide oak forest or in the yard of the Leshok Monastery, one of the most beautiful in the region. In the mountain village Berovo, in the eastern part of the country, you would be welcome with specialties made of local potatoes and liquor made of special plums.