Egypt on Saturday announced the discovery of two small ancient tombs in the southern city Luxor dating back some 3,500 years and hoped it will help the country’s efforts to revive its ailing tourism sector. Archaeologists in Egypt have displayed items, including a mummy, from one of two previously unexplored tombs in the ancient Nile city of Luxor. The mummy is believed to be that of a senior official from Egypt’s “New Kingdom”, about 3,500 years ago. Other items included figurines, wooden masks, and richly colored wall paintings.

The tombs lie in the Draa Abul Naga necropolis, an area famed for its temples and burial grounds. It is close to the Valley of the Kings where many of ancient Egypt’s pharaohs were buried. Egypt’s antiquities ministry said that the tombs had been discovered by a German archaeologist in the 1990s, but were kept sealed until recently. 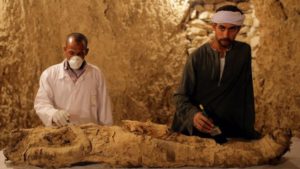 One tomb has a courtyard lined with mud-brick and stone walls and contains a six-meter (yard) burial shaft leading to four side chambers. The artifacts found inside were mostly fragments of wooden coffins. Wall inscriptions and paintings suggest it belongs to the era between the reigns King Amenhotep II and King Thutmose IV, both pharaohs of the 18th dynasty.

Among the artifacts found inside are funerary cones, painted wooden funerary masks, clay vessels, a collection of some 450 statues and a mummy wrapped in linen who was likely of a top official. A cartouche carved on the ceiling bears the name of King Thutmose I of the early 18th dynasty. 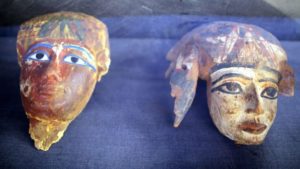 The identity of the mummified body is not known but the ministry says there are two possibilities. It could be a person named Djehuty Mes, whose name is engraved on one of the walls, or it could be a scribe called Maati whose name – and the name of his wife, Mehi – are written on funerary cones, officials said.

The other tomb was only recently “uncovered” and has not yet been fully excavated, the ministry said.

In September, archaeologists discovered the tomb of a royal goldsmith near Luxor.

The tomb, which also dated back to the New Kingdom, contained a statue of the goldsmith Amenemhat, sitting beside his wife.