The village of Rugince, in Kriva Palanka region, endures for years without children’s laughter, forgotten by the people. The denizens have to carry the water for 3 kilometers with donkeys

No road sign marks the way towards the village scattered on the hill. Just follow the curvy gravel road, eroded by the rains, branching from the highway near Stracin. Rugince, one of the “stone” villages from this area consists of about twenty dilapidated houses.

From the left, there are one or two of them, up on the hill you can see some more.
Grandpa Gjero sits in the smoky room in his house at the end of the village. His stove does not work, but the poor man still tries to make some lunch. A stream of sunlight, the only light in his dark stone room comes through the small square window. This man hasn’t had anyone to talk to for more than four years. He guards the big ceramic pot in his dark barn almost as a kid would a precious toy, but he can’t hide his joy while opening the door to share the sight of it with us.

At first, Grandpa Gjero (76) looked surprised by our visit. Nobody came here for years. He says: “There’s nothing to see, grandchildren. The young people all got away, the old died out. I am what you can see. I’ve been alone for four years.”
“Do you have anyone to argue with, Grandpa Gjero?” we ask jokingly.
“There’s a ‘berserker’ in the house bellow, who sets the teeth of the whole village on edge,” he replies.
In this wasteland, he substantiates by the fruit and vegetables from the garden in his yard. “God watered the peppers this year. I was unable to work them,” says the hunched old man. He keeps touching his ailing eye, he complains that he lost his left-side vision, and is going blind on the right side too. 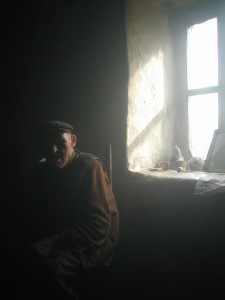 “I repaired the eye last year in Skopje, went to surgery, but it did not work. Nobody can help, it keeps hurting,” he adds. “It pains me, but I’m ashamed to be a bother to all those young children in the hospitals. They are old enough to be my grandchildren, there’s no point for them to try to cure me, at 76.”
He retells that his wife died four years ago. He has two sons, who live in Kumanovo. We ask if they come to visit him from time to time. He says: “They come, once every three years!” He sadly closes his eyes.
Four-legged wooden chair with a hard back, engraved from long use, his bed and smoky stove comprise all the treasures of Grandpa Gjero’s domain. And of course, the oval ceramic pot in the dark barn. It takes a while for our eyes to adjust, and then we notice it pressed against the corner. It looks magnificently big. Grandpa Gjero put stones at the base of his prized treasure. We help him to straighten it up, and he’s happy to tell us that he uses it for fermenting vines, or keeping grain.
Sitting on the iron-framed bed, he tells the story of how his mother found the vessel while grazing a flock of sheep on the nearby hill. He says there are more such pot through the village; some houses keep several of them.
Indeed, a similar, but smaller jar sits in Aunt Draga’s yard. She also uses it as a housekeeping item, and it’s cracked. Covered with a stone block, it looks like an ornament. Draga says she inherited it from her mother in law.
“Not everyone has pots. Some do, some don’t!” she says. She heard from her elders that the people used ropes to get the enormous pots from the top of the hill. She shares Grandpa Gjero’s belief about the city on top of the hill, home of an ancient people, the original owners of the pots.

We talk while drinking coffee in Draga’s home. We can only assume. The pots, buried in the ground, might have served as a natural fridge for keeping grains. Maybe the villagers hid part of their harvest there from Ottoman Turkish tax-collectors, to save the children from starving. Aunt Draga keeps quiet, then says: “You might be right, kids. Gjero says that there was some wheat in some of the pots when they were first unearthed.” She adds that some “museum people” came recently to claim Gjero’s pot, but he refused to give it to them.

The village is desolate, no kid’s laughter breaks its silence, and there’s no school to keep the kids here. The old people still residing here don’t receive pensions; they live by what they produce. Draga lives with her husband. She’s 60, but she feels old for her age, the hard work drained her force. “I’m only 60, but I can’t walk. My legs and arms hurt. The doctors say ‘it is rheumatism, mother.’” People rarely come to the village, so any visitor is a welcome change.
Only an occasional donkey call breaks the silence which encompasses the village. At the village spring, we meet the old lady Jagoda (84). She says she’s been alone for more than 30 years since her husband died from unknown reasons. She proudly explains that she managed to raise five children without any pension or welfare, but she regrets the deaths of her sixth birth: a pair of twins.
We sit on the fence of the small village monastery, a source of healing water. Jagoda tells that many people used to come here to look for a cure for various diseases. A pear tree used to rise above the holy spring, producing loads of little round winter pears.
To the left, an ancient stone cross attracts our attention. “When I came here, as a young girl, throngs of people gathered near the cross at St. Petka’s day. But during one holiday, heavy rain flooded the kettles used for preparing the food for the visitors, and the people got afraid and stopped coming here. People used to come from other villages too, but nobody comes here anymore. From about a hundred houses, barely twenty remain. Inhabited by crippled old persons, who drag their feet as I do,” says Jagoda.
Jagoda says that the hills used to be quite busy, as various kinds of people came, some looking for gold. Diggers from Kumanovo plowed the sides of the hill she calls Velestrana (Big Side). She also mentions the ancient pots.
Rugince is full of pearls, stones, and thorns. Some villagers brought the water from the well to their houses, but some of these old men have to carry it with donkeys for more than 3 kilometers every day. Ancient springs, fountains, and cattle wells line alongside the steep path. As we walk, we pass by stone dwellings with small windows. Over the door of one of them, there’s a gaping hole – maybe for hiding the sack of gold, a thought flashes.
The villagers claim that the stone structures on the top of the hill used to be a city of an ancient race of people. They imagine them as immensely strong and crafty. Grandpa Gjero scratches his chin saying: “Those people carried these enormous jars in their hands, as we carry water vessels. You can imagine what kind of people they were.”

We observe the stone buildings with untrained eyes, and the green meadows and pastures bellow them. From time to time we come upon stonewalled areas. They are all around the hill. They might have been used for keeping sheep, or small gardens fenced to protect them from grazing cattle. Aunt Draga does not know about them, she says her legs are bad, and she never climbed the hill. Grandpa Gjero sees us off the muddy road.
We leave him with his pot, the donkey, and his loneliness. He walks and even seems to be able to run, in spite of his old age, presenting us with apples and quinces from his garden, God’s gifts for his survival. He gazes at us and then returns to the smoky room, to his silence, after he asked us to make the last picture with his wife, meaning a photo of him at the grave of his deceased love.